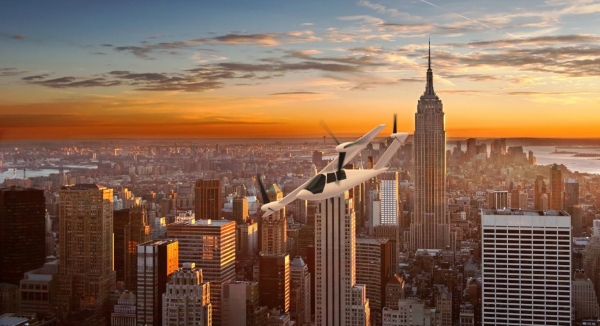 US authorities approved the plan to jointly develop personalized aerial vehicles (PAV) on December 8. With the investment, Hanwha Systems aims to be one of the "game changers" in the global PAV market.

A defense industry official said the US Committee on Foreign Investment’s approval would contribute to the development of two companies' PAV ambition to maximize the synergy effect.

Under the plan, the South Korean defense firm is set to participate in Overair's project to develop a passenger air vehicle, nicknamed "Butterfly."

Known previously as K4 Aeronautics, Overair is a spinoff of Karem Aircraft, which manufactures aerial vehicles capable of vertical takeoff and landing. It is one of the core partners of the Uber Elevate project for commercial flying taxi. Uber is a global ride-sharing service and Uber Elevate is its project to commercialize air-taxis.

"The US government’s approval for Hanwha to invest in Overair will accelerate the development of the PAV projects," said Kim Youn-chul, the CEO of Hanwha Systems. "We are financially ready to enter the flying taxi market following our recent initial public offering in South Korea's securities market."

Besides Hanwha Systems, Hyundai Motor and Korea Aerospace Industries(KAI) are among a few companies participating in an optionally piloted PAV project, which has been driven by the Ministry of Land, Infrastructure and Transportation and the Ministry of Trade, Industry and Energy since early last year.

Airborne transportation is presumed to be a solution to the problem of traffic congestion. It also offers an environmentally friendly alternatives to the existing mobility options, according to experts.

Governments around the world have been accelerating their efforts to embrace the futuristic technology to combat air pollution, traffic noise and traffic jam.

Professor Yoon-yonghyun, Graduate School of National Defense Business Administration in Kookmin University told Wikileaks Korea "The urban air mobility consists of four types such as passenger drone, PAV, Flying car and air-taxi. Among these, air-taxi seems to be highly profitable for commercial use in South Korea."

Globally, not only the Hyundai Motor Group, which decided to cooperate with Uber air-taxi is a competitor, in domestic market, but also the france's leading aerospace manufacturer Airbus, Boeing in the United States and chinese firm EHang are competing for the global air-taxi market.

Although air-taxi market is still very immature and market uncertainty is high for future research and development, industry watchers forecast the air-taxi business will start as early as by 2023 with a full-fledged commercial business beginning by 2025, in which Hanwha Systems and Overair research and development are planning to bring the Butterfly platform to the US air-taxi market.

Butterfly is an electric-powered vertical takeoff and landing (eVTOL) aircraft with an optimum speed. It makes a minimal noise but highly efficient. It is also safe and green, therefore could be an optimal mobility service for an urban environment, the company said.

"Air-taxis are emerging technologies that may change the face of modern transportation. It will be one of the niche vehicles as a new generation transportation to solve ongoing traffic problems compared to other public transit such as various cars, subways, railways, vessels and trigger aircrafts and so on" Pro. Yoon said.

Butterfly is to have a seating capacity of four passengers and one pilot while its battery capacity will allow it to achieve airspeeds of up to 240 km/h and a range exceeding 100 km.

Hanwha Systems is also looking to increase its investment in Overair and explore opportunities in Korea’s domestic market at the same time.

Government agencies and private companies around the world are actively pursuing air-taxi development thanks to recent progress in battery and motor technologies, collision avoidance, autonomous flight and other advanced technologies.

Morgan Stanley anticipates that the urban air-taxi transport market will grow to $1.5 trillion by 2040.